A downloadable game for Windows, macOS, and Linux

Tindra has spent a week in Tokyo with her friend, Emil. But she's not been able to enjoy her time there as much as she had hoped.

On the last day, she attends a monthly night club party for queer women and meet the dashing "Midnight Prince" of the club, Yozora.

And she's ready to do whatever it takes to make Tindra's last night in Tokyo memorable...

Last Night in Tokyo is a short kinetic visual novel based on real life LGBTQIA+ events and establishments in Tokyo, Japan. From the eyes of a tourist on her last day in the city, you'll get to experience a small taste of what the Japanese queer scene has to offer. We hope that you'll enjoy the story and that you'll also find that it scratches your interests to learn even more about its topics.

Now, it's not my usual type of visual novel, since I'm not a huge fan of romance, but the art is nice and its free.

This was beautiful! The writing, backgrounds, character design... It was all lovely!

I would love to have another update on her in the future with maybe some school children and her life and how she develops as a person living there with some choices as well.

I enjoyed playing this, mostly thanks to the glimpse into the Tokyo scene. I would love it if you made a similar game again, moving and educating us japanophile gaylords and lesbiankings. I could see this becoming a monthly episode!

This novel was SO GOOD! Great writing, lovely art, and the story was really intriguing! I'm not into kinetic novels, but after trying this one out, it definitely changed my mind in trying out more. Also Yozora is a major cutie.

Very lovely short kinetic visual novel. The art is gorgeous and the setting is really nice as well. Nice work, I enjoyed it.

Picked up this game up 'cause all the princely types really piqued my interest. I don't often play kinetic novels but I didn't notice that until the end and I didn't care since it didn't seem to need it... Buuuuut having the choice to speak with mitsuki more would've been nice.  It was a nice seeing Tindra work through everything and move forward [with a little help from her friends]

Q. Do you plan on continuing this story? I'd totes love to see a VN based around the dansou café <3 [and to see yozora and mitsuki interact!]

Thanks! Continuing this particular story is not currently in our plans but it's not something we've ruled out in the future. I have a large interest in the dansou scene so I want to explore it more in writing regardless.

Reply
Keeper of Time4 years ago

Hello! I am the leader of the new translation team: "Keepers of Time". We would like to translate this game into Russian if you give us your permission.

I can't help myself but feel that this game is quite problematic. Not in just the game itself, but when you see it in the context of its creators. If you see Andrea Ritsu's rants about male characters in "Lesbian" stories or stories aimed at "girls/women", you know that she really doesn't like that. But then she adds a male character in her own "Yurijam" game. Why is it okay in your game? Because he is trans? I am not asking this with any malicious intents, I'm genuinely curious about it.

I really liked the game and most of the characters were interesting but I agree. I've noticed she doesn’t seem to like male characters in fiction aimed at lesbians/girls. I'm also a trans lesbian myself and I'm disappointed because she probably wouldn't have put him if he was cis.

First off. Emil is in the game because one of the team members is  a trans man and I wanted to have more than one single kind of rep in the game. It also allowed me to reference the FTM Bois Bar in Shinjuku, a real life event

Second, I don't mind male characters in lesbian stories or stories aimed at girls, I mind men taking over the narrative in a heteronormative fashion. Whatever you're suggesting here is projection. Hell, most of the GL manga I recommend have men in them to some extent, they're just not the main focus.

I'm guessing my "rants" reference things like me complaining about Pripara having a male unit now, which I've pointed out several times is a problem to me because of how they've been used to steer the narrative towards "girls like boys", not because boys exist. Hell, the series had men before that and I never had a problem with that aspect for a good three years of the series.

I've said it plenty of times, I don't much care for stories revolving around men or heterosexual romance stories. It's not hypocritical of me to have a male supporting character regardless if he's cis or straight, which in this case, Emil isn't.

So no, to close this out. I don't believe you can't have men in a Girls Love story. I'm just not interested in anything focusing on them. If I couldn't like GL with boys in it I would never be able to like Their Story or After Hours, for example. Both of which I love.

I loved this game!

Very high quality in terms of graphics and sound, and the story is cute. Admittedly, I kind of expected it to have some kind of horror twist because of the deep red background and the choice of font for the title, but that was not the case. It was, however, also not a problem. The banter between Tindra and Emil was funny, A+!

Looks like a great game, can't wait to try it out! 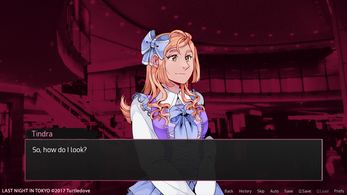 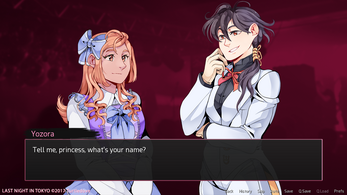 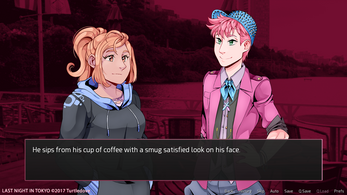 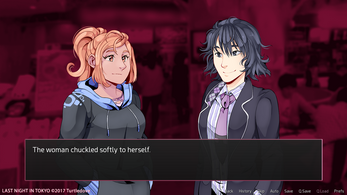